The Fourth of July is a big deal in Provo—like, probably a bigger deal than Christmas. There are a bunch of events put on by the Freedom Festival that go on throughout the week of the fourth and it’s created quite a few of my family traditions. Though Aaron has lived in Provo for about four years, he’s never been in town for the fourth and while I was excited to show him all the cools stuff I grew up doing, I was a little bit nervous too. What if this stuff is only fun because it’s a tradition for me? What if I’ve talked it up but he ends up thinking it’s just okay? The prospect was a little bit scary.

It all turned out even better than expected though because watching Aaron experienced some of these things for the first time was really fun. Even things that I though were borderline boring (ahem, parade) he thought were pretty great and it was fun to share it with him. It was one of my best Fourths in Provo yet. Now let the gigantic post begin!

Utah Symphony Concert in the woods

The weekend before the Fourth Aaron and I went up to Sundance to see the Utah Symphony’s patriotic program. Sundance is my favorite Ski resort in all of Utah. Most people kind of think of it as the beginners ski resort because it’s maybe a tenth of the size of Alta or Snowbird but I like it because it’s not commercial feeling like all the others. When you go up there you really are at a resort in the woods. It’s so peaceful.

Sometimes you forget what a big difference there is between listening to a recording and hearing a symphony play live. Aaron and I sat on the grass with a blanket and snacks and had quite a nice evening listening to the symphony as it got dark and the stars came out (because you can actually see them up in the mountains!) 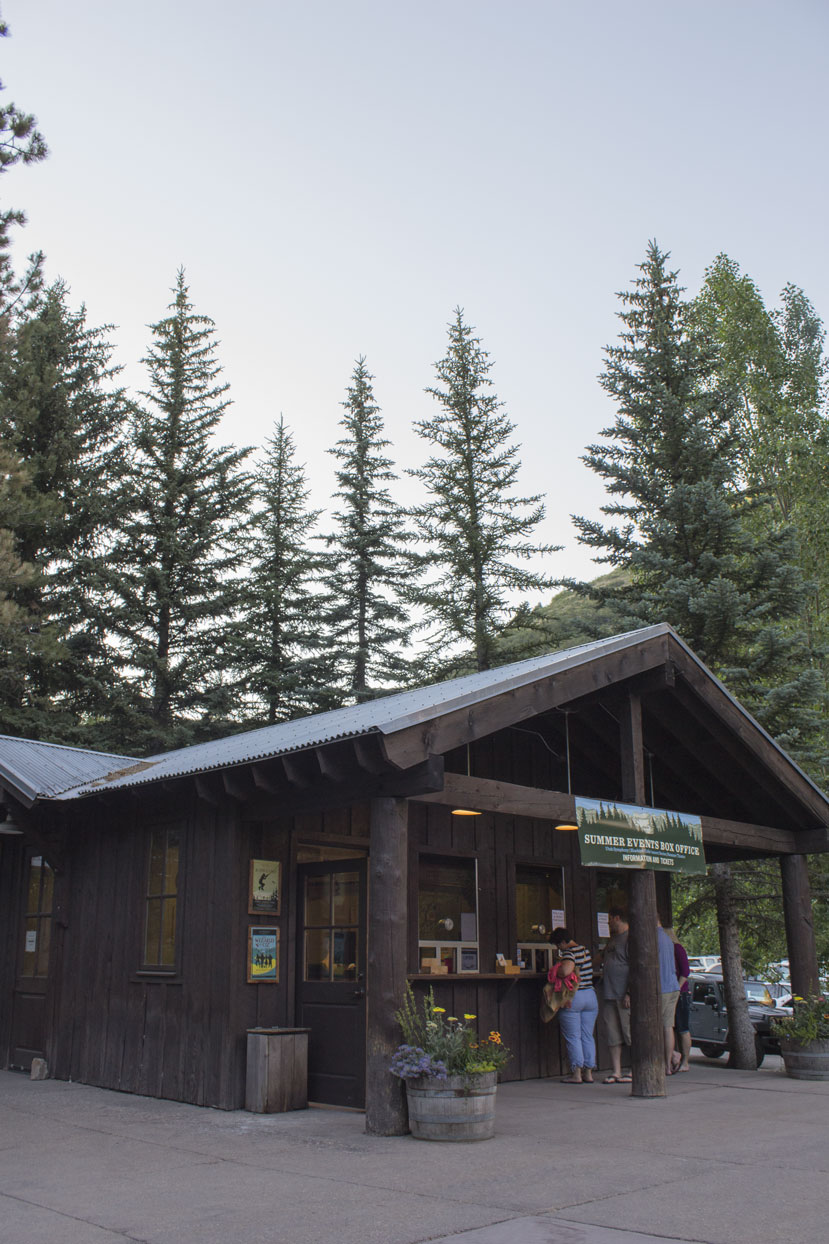 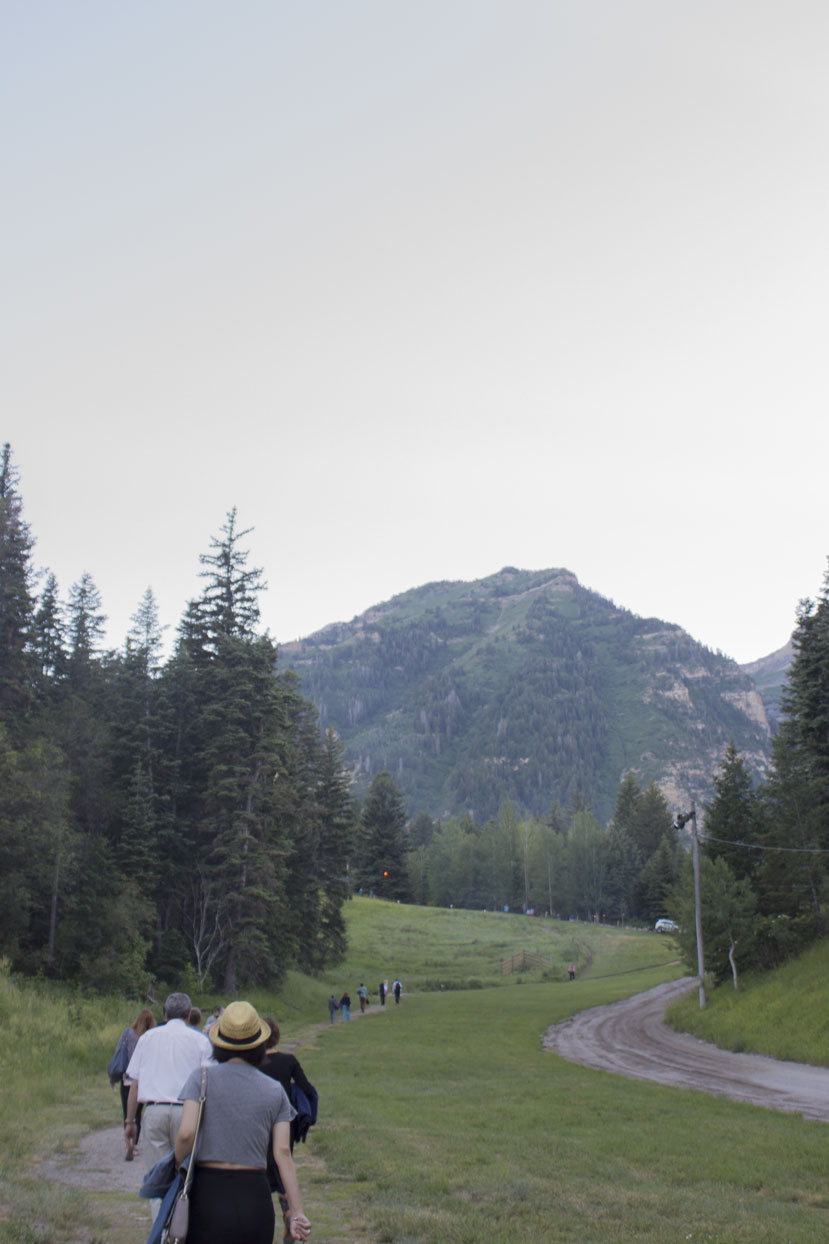 We decided to hike up rather than wait for the trailer ride up the slope to the amphitheater because the line was about a mile long.

We sat at the very top of the amphitheater on a blanket and enjoyed the view. 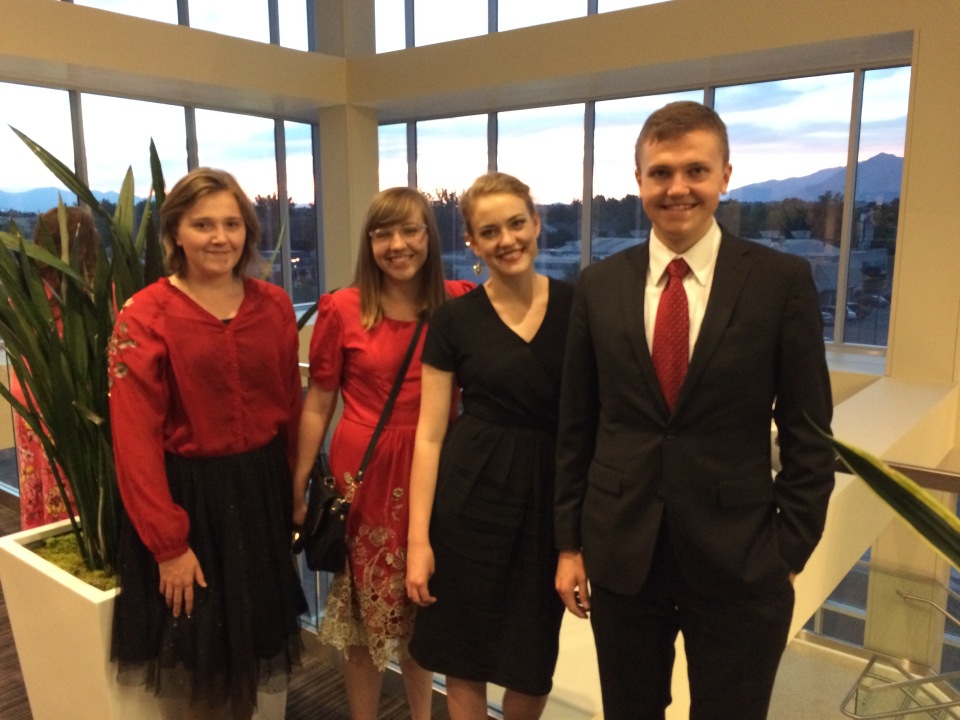 Blurry phone photo outside the dinner at the convention center. Aaron had to stay late at work unexpectedly so he wasn’t able to come with us. 😦

Every year the Freedom Festival recognizes several people from around the country who have exemplified the cause of freedom in one way or another and they honor them at a big fundraiser dinner. The food is pretty fancy but the dinner is one of my favorite things to go to because the awards recipients get to spend a moment and share their story, and they are absolutely incredible human beings. This year was probably the best dinner I’ve ever been to. The awards this year were given to A World War II Japanese-American veteran, a preserver of veterans’ histories, a veteran amputee and and while all of the recipients had incredible stories, the one that particularly touched my soul was Timothy Ballard, the founder of  Operation Underground Railroad. He used to work for the FBI rescuing children from sex slavery but found that there were so many issues with jurisdiction as he went abroad as a member of the FBI, that he formed his own organization to continue the work. His stories were so heartbreaking! There are an estimated 27 million people living in the sex slavery right now, 13 million of them are children. Here is an infographic his foundation made with statistics.

The balloon festival takes place over several days veeery early in the morning. My favorite part is when you first get there and there are about 35 balloons laid out on the grass. They have these giant fans they use to inflate them and just walking around these mammoth balloons as they get bigger and bigger is such a surreal experience. You don’t really realize how large a hot air balloon is until you are standing next to it. 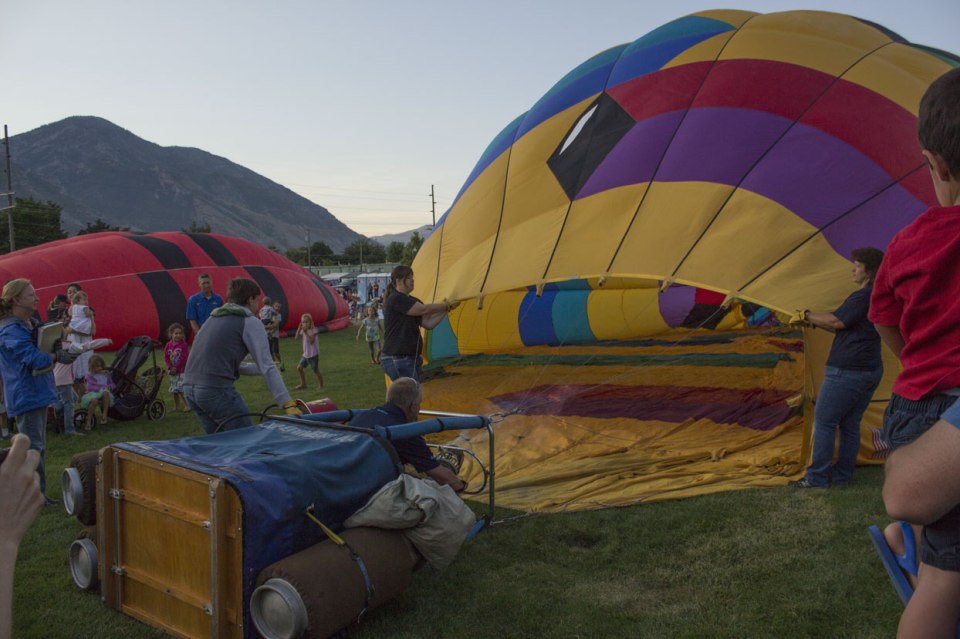 Filling the Balloons up.

When I was younger I got to go up in one of the balloons, and this year Sam and Hannah got to do it. Their pilot was a pretty cool guy, which is saying something because a lot of hot air balloonists are a bit excentric. I mean, you have to be if you’re going to drop $100,000 on a hot air balloon. These guys come from all over the country to participate in the balloon fest and it’s pretty good fun. After they all take off there are some games where they try and drop bean bags on targets and stuff, but most of the pilots just float away across the valley instead of sticking around. When it gets too hot, they try and find an open place to land—a parking lot, park, or even just a residential street, and whoever is around comes out of their houses in their pajamas and helps fold the balloon up. Then the pilot shares a bottle of champagne, (or cider in this case) with whoever helped them.

About to take off

The Star Wars Balloons are always a favorite

Every year before the Parade they have the freedom run, which includes a 5k, 10k and half marathon that goes along the parade route. Though some of my siblings have done it before, I’ve never been tempted to wake up an a ridiculous hour just to pay money to run, but for Aaron’s sake, I decided we were going to have the full experience and do the 5k it this year. We started up by the South end of BYU campus, ran all along the parade route, and then up 9th east (it’s a hill. one I didn’t think was part of the race) and end at Kiwanis Park. Running the Parade route was pretty cool where everyone who had camped out were just waking up, but that last hill was death.

As a kid the parade was one of my favorite things. There were giant balloons, people who threw candy, marching bands, tanks from WWII and Vintage Rolls Royces driving around, plus all the cities’ pageant queens on floats. Then I got older and it got a little less exciting and I haven’t even gone for the last few years. I guess the parade is pretty cool, but everyone in Provo doesn’t really go for the parade. They just go for the party the night before. At exactly 3pm the day before the parade, University and Center street become a shanty town of people claiming their turf for the next day. They bring tents, and canopies, couches, and waterbeds. After it gets dark people have BBQs and music and there’s a giant group of bikers that ride up and down the street (one group of cyclists, and one of Harley people). Any businesses or homes along the route try their best to fence things off before the hoards come because people get pretty territorial about their areas and it’s pretty weird, but again, just one of those tradition things.

I didn’t take any of these photos, but here’s an idea of what you see.

The library fenced off like it’s a zombie apocalypse.

At the parade with Sam, Mati, and Olivia

The parade was pretty good, and my mom was in it because she is on the city council. They were all on a trolley which was kind of fun and I think she had a good time.

Mom, on a trolley

The Stadium of Fire

The grand culminating event on the Fourth is the Stadium of Fire. It’s at the LaVell Edwards stadium and is basically a theatrical patriotic program, followed by a concert, followed by a million fireworks. 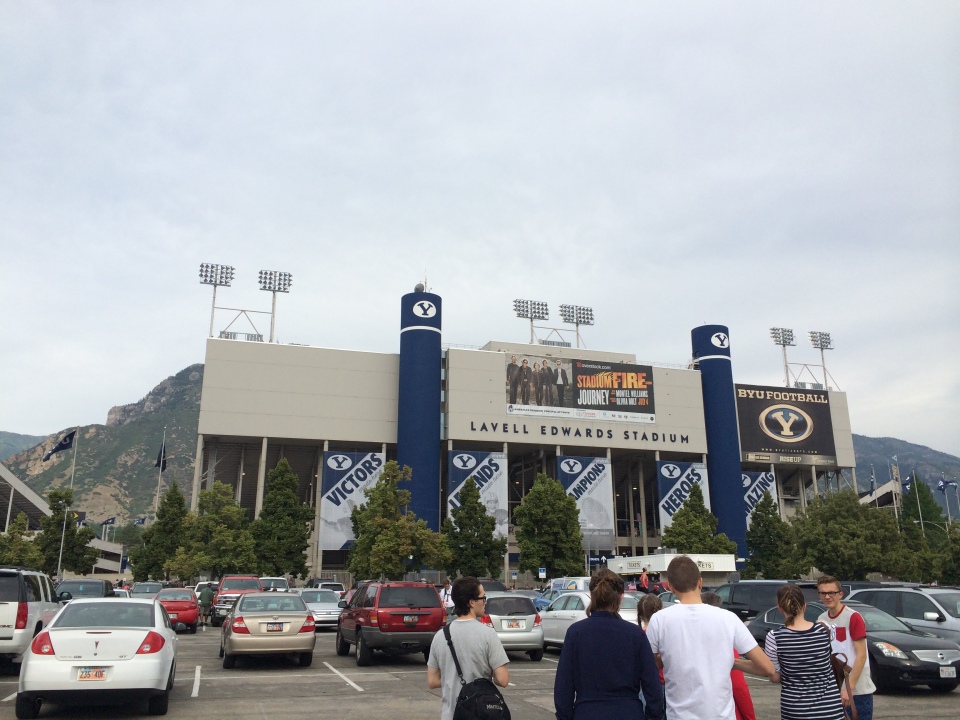 On our way in 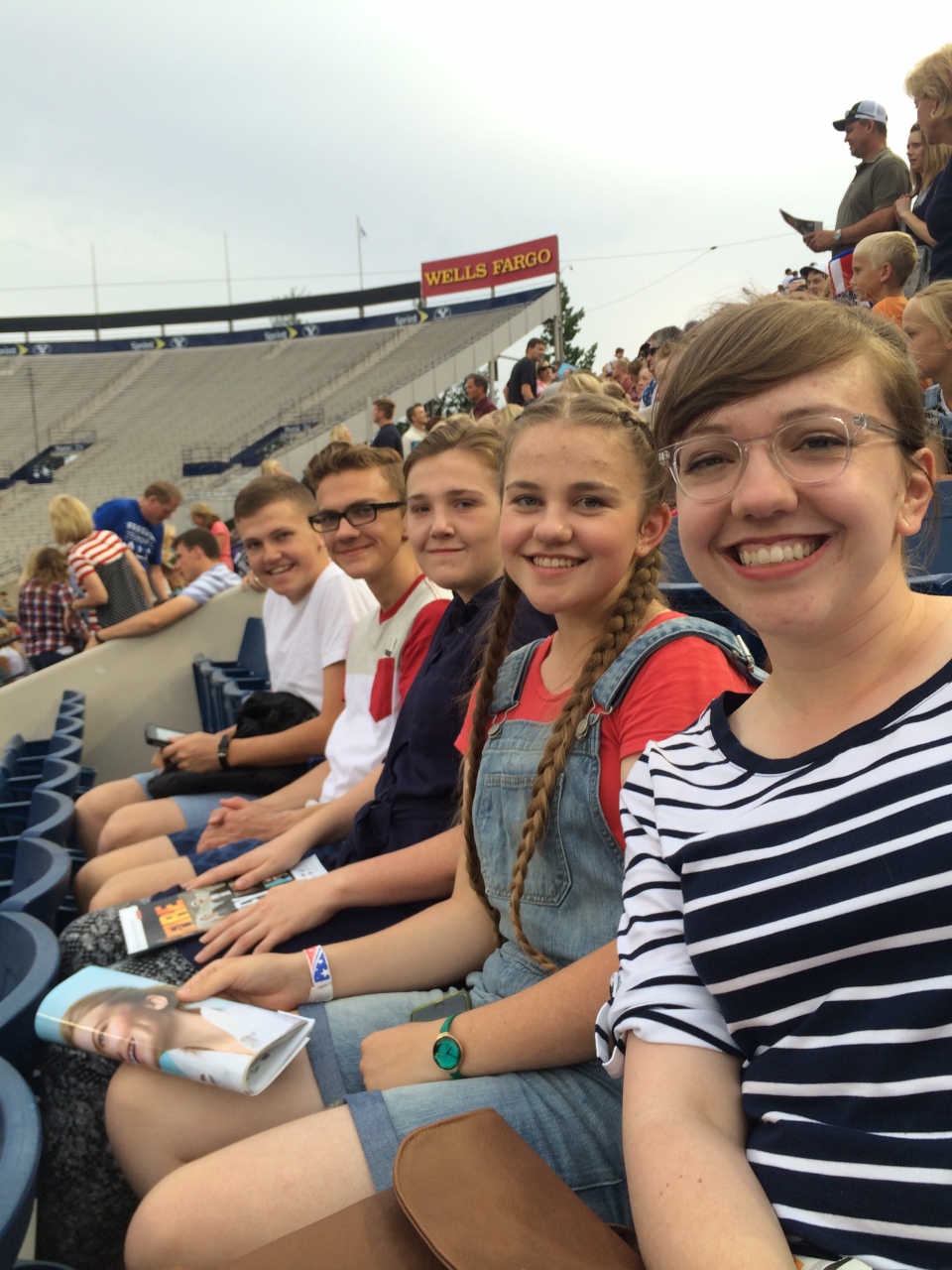 They have fighter jets fly over the stadium, and parachuters that land in the field, which are cool. Then a huge group of about 300 teenage dancers do some choreographed dance with glow sticks and flags. They have some variety show, which this year was the guys on youtube that put mentos into coke (who knew they preform live shows in stadiums?)

The mentos guys surrounded by a few of the dancers.

There was this really awesome jazz band that was the best I’ve ever heard and then Olivia Holt performed, who is apparently a big deal with the younger crowd, but I had never heard of her—one of those up and coming Disney Channel singer stars who is younger than me. After all of that Journey performed and put on a surprisingly great show. I’ve never really listened to their music but was impressed that I knew most of their songs that they played. It all ends with a huge fireworks show.

Going with Aaron for his first time to these things was pretty fun, and overall I would call it a success.