Our house has good bones. In plain english this means that it is ugly, but some (allegedly) foolish young couple saw all the cool things that could be done to transform it into something better and decided it would be fun. There is a wide selection of projects that could be done to help transform this “good bones” house into a great house, but we thought one that would have a fairly large impact would be to work on the front porch. It is, after all, the first thing people see.

There are several things wrong with the front part of our house, however, the two most prominent were the wall of trellises that cover half the house, and the sagging porch. It is difficult to see the photo below, but the concrete slab that forms the front stoop had settled down an inch or two and consequently, the columns and covering had sunk with it. The “columns” made out of metal were not my favorite either. Mix this with the fortress of vinyl trellises and you have yourself what is commonly referred to as “the rental look”

Our first thought was to get the slab lifted, because we had heard that cost less than pouring a new one. But after getting a few estimates that were close to $1400, we decided that was not going to happen. We consulted with our contractor TJ, and after taking a look at it he said it would probably be fine if we just replaced the columns with some that were slightly taller to make the roof level again, then we could just remove and re-pour the front step, which would make the sloping barely noticeable. This sounded like a much better plan. We looked at a bunch of front porch column styles, and chose something we liked then he got to work.

I wasn’t home while he lifted it, so I’m not exactly sure how that happened, but apparently the support beam the columns were connected to was rotted, so he replaced it with a new board before attaching the posts.

He left the wood for about a week so it could climatize and get whatever cracks it was going to have, then he filled them in, and made the trim to fit around the top and bottom. After that, the final step was painting!

Top trim. As you can see we have some other wood that may need to be looked at.

On Saturday Aaron spent the morning while I was at class ripping out the trellises, and TJ took them to the dump for us with everything else. We still need to fix the front facade on the top of the porch, add new trim around the windows, and a rain gutter on the left side there, replace our front door and porch light,  and of course add some plants (which will be our next project) but I feel like it is coming along. 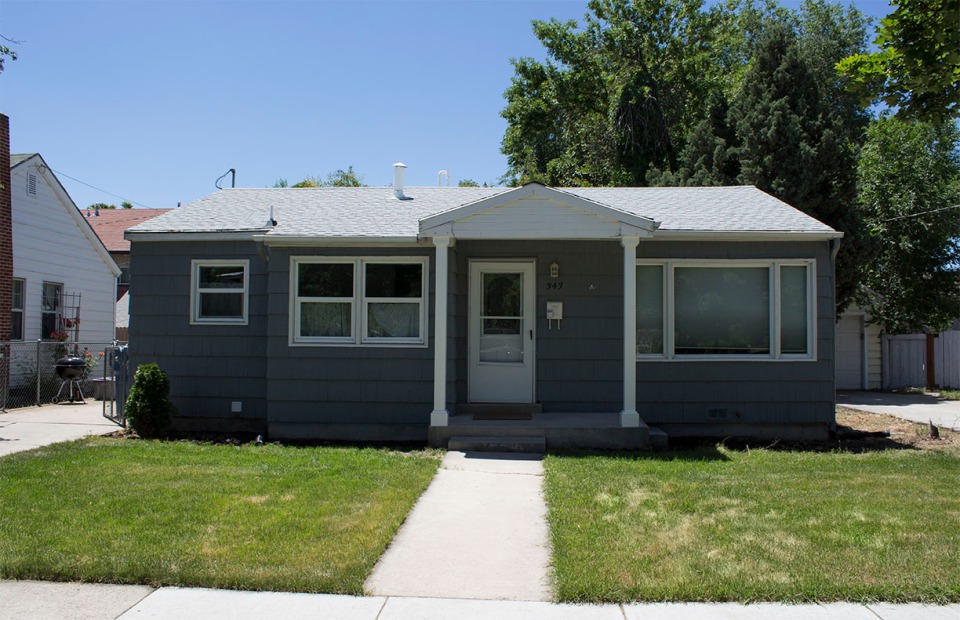